Today’s guest post is from Samuel Rushay, senior archivist at the Truman Presidential Library and Museum, who is featured in our newest “Inside the Vaults” video about the adventure of John Paton Davies.

“…I stood in the open door of that miserable [C-46, Curtis] Commando and decided—`Well, if nobody else is going to jump, I’ll jump.  Somebody had to break the ice.’  So I wheeled out and dove.” John Paton Davies (Excerpt from letter to Flossie [September 22, 1943], John Paton Davies Papers, Truman Presidential Library and Museum).

Twenty-one men, including John Paton Davies, second secretary of the American embassy in Chungking, China, and journalist Eric Sevareid of CBS, were aboard a C-46 transport plane.  Their mission was to carry supplies from India to China in support of Chiang Kai-shek’s forces fighting the Japanese during World War II. They were flying over the “hump,” as mountainous Burma was known, when engine trouble developed, a not uncommon problem for the newly developed C-46.

In The American Journey of Eric Sevareid by Raymond Schroth, when it became clear the plane was going to crash, Davies maintained a calm demeanor and remarked, “Just kids, kids running this thing” (he was 35 years old), and jumped. He was the first person to leave the plane. The others followed.

The plane crashed into the Himalayan Mountains of northern Burma and exploded. Twenty of the men survived the jump, but other perils lurked in the jungle below: wild animals and, potentially, hostile tribespeople and the Japanese Imperial Army.

In The American Journey of Eric Sevareid, although Davies admitted that he was “scared fairly stiff,” he tried to communicate with a group of about a half-dozen Naga tribesmen, allegedly “fierce headhunters,” who came upon Davies and his group. The Nagas did not speak English, of course, nor did they seem to understand Chinese. Therefore, Davies took out a small notebook and began making sketches, or “pictographs.”

Trying to determine where signs of western civilization might be, he sketched a locomotive with cars and uttered “choo-choo, chuff-chuff.” The response was “blank incomprehension.” Next he drew a Japanese flag and tried to vocalize the sound of battle. Again, there was no understanding.  He also drew British and American flags and outposts in an effort to determine where his group might find assistance and rescue. Davies’ jots also included men parachuting from airplanes, perhaps his way of communicating to the Nagas how he and his men had arrived in their company.

The Nagas’ reaction to Davies’ written and oral efforts was impassive attention, but, significantly, not hostility. The Nagas led the men to their village, and the fear Davies felt when one of the tribesman made a cutting motion across his throat was relieved when the victim ended up being a goat that was sacrificed for a banquet.

Eventually, C-47s, perhaps responding to the downed airplane’s radio distress signals sent before it crashed, arrived.  The C-47s dropped supplies, including weapons, to the stranded men, who conducted a lively trade with the Nagas. In Davies’ words, “instead of decapitating us, the savages adopted us” until the party’s eventual safe trek to India a few weeks later. 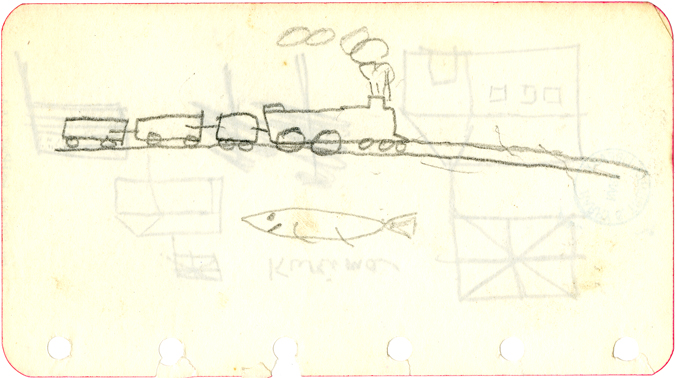 Drawing of a train from the John Paton Davies Papers, Truman Library

It’s impossible to know whether or not Davies’ drawings helped ensure the survival of the downed airmen. Still,it is safe to conclude that his written efforts, and their verbal accompaniment, showed the tribesmen that Davies was not hostile and was trying to communicate in a peaceful— and amusing—way. These drawings are located in the John Paton Davies Papers, which are available for research at the Harry S. Truman Library and Museum.

In 1948, Davies received the Medal of Freedom for his service in China and India during World War II. Davies would soon become a victim of McCarthyism, however, as his frank reporting about wartime ally Chiang Kai-shek came under fire from friends of Chiang. In 1954, he was dismissed from the Foreign Service as a security risk by Secretary of State John Foster Dulles, a sad chapter also documented in Davies’ papers at the Truman Library.