While we are not rooting for one team or the other in the upcoming Army vs. Navy game, we must concede that the 1913 regulations governing the admission of candidates into the U.S. Naval Academy were rigorous! Learn more in today’s post from Samuel Limneos, an archives technician at the National Archives at Philadelphia.

Are you physically sound, well formed, and of robust constitution?

Do you have good natural capacity, an aptitude for study, industrious habits, perseverance, an obedient and orderly disposition, and a correct moral deportment?

Can you hear the ticking of an ordinary watch at a distance of 40 inches?

Do you have at least eight opposing molars, two on each side in each jaw?

If so, do you think you have what it takes to be admitted as a midshipmen at the United States Naval Academy?

While processing a series of records from Record Group 181, Records of the Naval Districts and Shore Establishments, we uncovered an interesting booklet entitled “Regulations Governing Admission of Candidates into the U.S. Naval Academy.”

Dated 1913, the regulations outline the U.S. Navy Department’s physical, moral, and intellectual requirements for enlisted Navy personnel to be admitted to the U.S. Naval Academy as midshipmen. To see if you would qualify, try a few of the questions from the practice examination! Or grab a friend and quiz one another!

If you can hear this, you are good to go!

You had to be tall!

Dictation and Spelling: Candidates must be able to “write, from dictation, a list of not more than 100 selected words, or paragraphs from standard pieces of English literature, in both prose and poetry.” 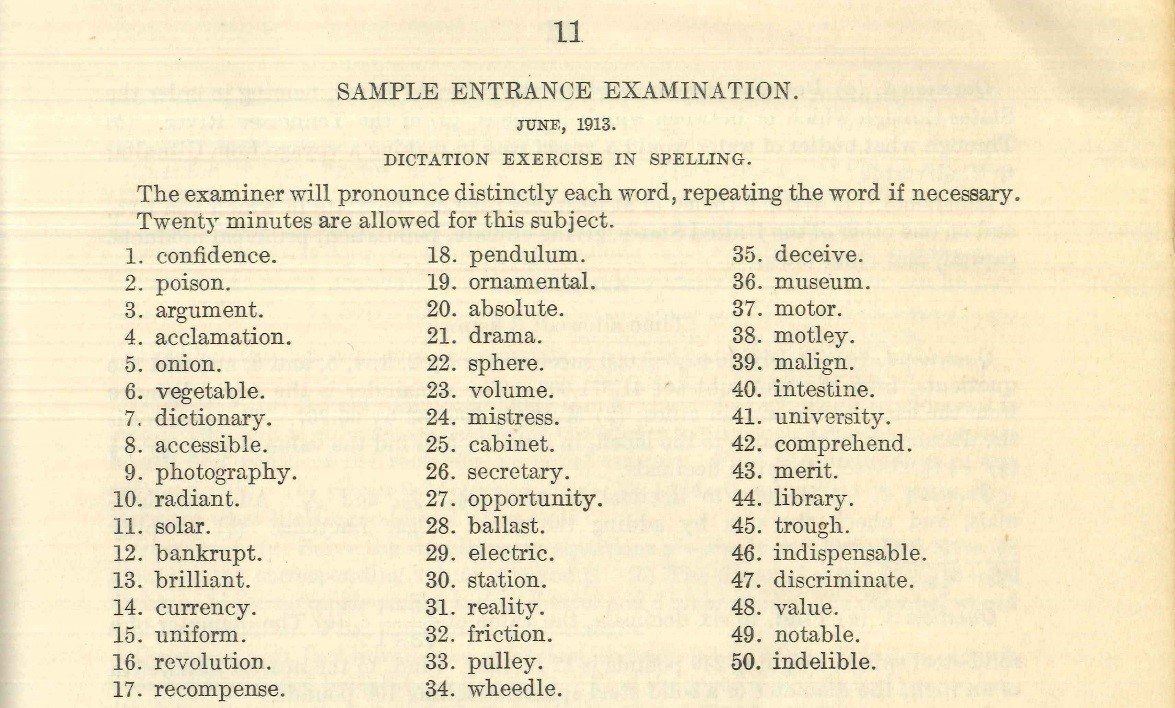 Grammar: Candidates must “exhibit thorough familiarity with English grammar . . . the subject and predicate in the sentence must be given, with modifiers (if any), and also the part of speech, and kind, case, voice, mood, tense, number, person, degree of comparison, etc., as the case may be.”

United States History: Questions “concerning the early settlement in this country; the forms of government in the colonies; the causes, leading events, and results of wars.”

Arithmetic: Candidates are required “to perform with facility and accuracy the various operations of addition, subtraction, multiplication, and division of whole numbers, whether abstract or compound, and to use with facility the tables of money, weights, and measures in common use.”

Algebra: The examination will “include questions and problems upon the fundamental rules, factoring, greatest common divisor, leas common multiple, algebraic fractions, equations of the first degree with one or more known quantities, simplifications of expressions involving surds, and the solution and theory of quadratic equations.”

Geometry: Candidates are “required to give accurate definitions of terms used in plane geometry, to demonstrate any proposition of plane geometry as given in the ordinary textbooks, and to solve geometrical problems, either by construction or by an application of algebra.”

Do you meet all of these qualifications? Congratulations—you could have been a 1913 midshipman!

2 thoughts on “Do You Have What It Takes to be a Midshipmen at the U.S. Naval Academy? 1913 Edition”